Alexander Graham Bell and the Telephone 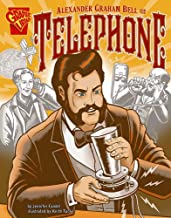 This book tells the story of how Alexander Graham Bell came up with the telephone, and how his invention changed the way people communicate.

This book tells of the inventor and the invention that changed the way the world communicates. In dramatic, graphic novel format, it portrays the experiments with sound, electricity, and the human voice that led Bell to his startling new invention. Using existing telegraph wires, Bell found he could transmit the human voice. Readers will learn about how the telephone became big business, and its inventor’s name became a household word.