Commodore Perry in the Land of the Shogun 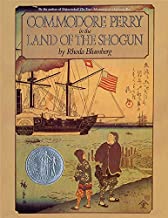 In 1853, few Japanese people knew that a country called American even existed. For centuries, Japan had isolated itself from the outside world by refusing to trade with other countries and even refusing to help shipwrecked sailors, foreign or Japanese. The country’s people still lived under a feudal system like that of Europe in the Middle Ages. But everything began to change when American Commodore Perry and his troops sailed to the Land of the Rising Sun, bringing with them new science and technology, and a new way of life.

This book details Commodore Matthew Perry’s role in opening Japan’s closed society to world trade in the 1850s, which is one of history’s most significant diplomatic achievements. Highly recommended!