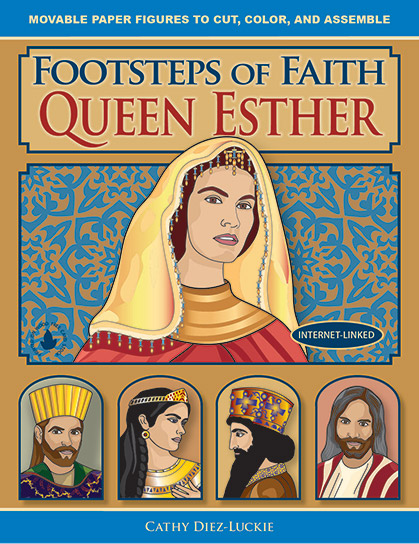 Now children ages 6 to 12 can make movable action figures and retell the Bible history of Queen Esther with Footsteps of Faith Queen Esther: Movable Paper Figures to Cut, Color, and Assemble. The leading characters? Queen Esther, King Xerxes, Queen Vashti, Mordecai, and Haman, will come to life as children color, cut, and assemble each figure with movable arms and legs and use the king’s scepter.

A Jewish orphan named Hadassah is raised by her cousin Mordecai and is chosen by King Xerxes I to become Queen Esther of Persia. She takes the place of Queen Vashti, who is banished from the king’s presence for not obeying his command. Mordecai refuses to pay homage to Haman, who in his wrath vows revenge and devises a plot to annihilate the Jews. Queen Esther must save her people from destruction by exposing the plot to the king!

Be the first to review “Footsteps of Faith: Queen Esther” Cancel reply