Mao Zedong: The Rebel Who Led a Revolution 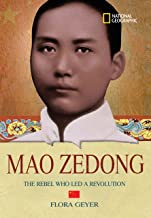 Hailed by many as a truly liberating hero, others demonized Mao Zedong as a brutal monster. This biography outlines the revolutionary life of the first leader of the People’s Republic of China and sets his march to power in the context of world history.

Born in Southern China in 1893, this farmer’s son would rule the world’s most populous country. The young Mao Zedong grew up in a world desperate to break with the ancient rules of the Qing dynasty. Mao challenged convention early in life, and was expelled from school. He joined China’s new Communist Party, and led China’s historic revolution.

Be the first to review “Mao Zedong: The Rebel Who Led a Revolution” Cancel reply