Tiananmen Square Massacre: The History and Legacy of the Chinese Government’s Crackdown on the 1989 Protests, The 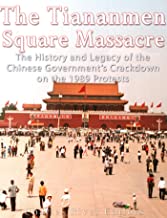 The Tiananmen Square Massacre: The History and Legacy of the Chinese Government’s Crackdown on the 1989 Protests examines the plight of the protesters, as well as the evolution, peak, and the bloody unraveling of their cause. Testimonies from not only protesters and eyewitnesses themselves, but the version of events from authorities, journalists, and soldiers are taken into account, giving more evidence to the reality that not everything is black-and-white.

Tank Man is the nickname of an unidentified Chinese man who stood in front of a column of tanks leaving Tiananmen Square on June 5, 1989, the day after the Chinese military had suppressed the Tiananmen Square protests by force. This iconic scene captured by Widener, dubbed the “Tank Man,” has become one of the most widely recognizable photographs from the 20th century. The Tank Man would become one of the most defining symbols of the cause – defiance against what the people deemed an oppressive higher power, shored up by the iron wills of this unidentified man and millions like him.

Be the first to review “Tiananmen Square Massacre: The History and Legacy of the Chinese Government’s Crackdown on the 1989 Protests, The” Cancel reply