Timeline History of the Mexican-American War, A 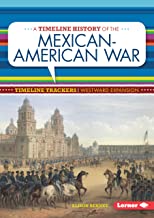 See how land conflicts erupted into violence between these two neighboring countries. Track the events and turning points that led to the Mexican-American War, and learn how the aftermath shaped the western expansion of the United States.

By the early and mid-nineteenth century, many US citizens were moving westward. Some of them settled in the territories of Texas and California, which belonged to Mexico at that time. In 1835 the tension between the two countries turned violent; US settlers started fighting for independence in the Texas Revolution. That conflict went on to ignite the Mexican-American War in 1846.

The war lasted close to two years and claimed thousands of lives. In the end, Mexico lost a huge amount of land to its northern neighbor in exchange for money. The war left bitter resentments between the two governments, which now had to manage a shared border, unrest among their citizens, and their own civil wars.

Be the first to review “Timeline History of the Mexican-American War, A” Cancel reply